What's in an anthem?

With the Olympics on pretty much all day and night, you may have heard the occasional National Anthem being played (except perhaps the Australian one).

Fortunately Australia's national anthem isn't all that good, so you're not missing out on much if you haven't heard it. Our old anthem was much better than the current one anyway. It was about a guy who stole a sheep. The new one has Australia "girt" by sea.

And before you ask, yes, "girt" is a real word.  It means "to encircle", though I prefer the Urban Dictionary definition - "to leave quickly out of necessity".  Somehow that seems to fit.

But some anthems actually sound good - well the music anyway. Who knows what the words are. Well, dear reader, I do - some of them at least. And boy, do they make girt look good. 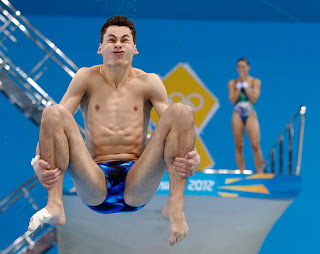 This image and a few more can be found at Digital Spy.

Before we delve in a little deeper, some background information. It seems most national anthems are based around fighting against oppression from an outside force ie. someone trying to kill you and take your homeland. So there's not too many light and fluffy anthems - though Brazil's was very nice, if you like the gentler approach.

Anthems also sometimes change over time, with several countries having at least two in their history. If I haven't chosen the most current anthem for a particular country - sorry.

So without further ado, here are some select words (chorus or verse) to a few national anthems. Remember these words when you next see an athlete singing on the dias, and pity the athlete that comes up against one of these countries ...

Ukraine is Not Yet Dead
Ukraine is not yet dead, nor its glory and freedom,
Luck will still smile on us brother-Ukrainians.
Our enemies will die, as the dew does in the sunshine.

O Homeland, before your unarmed sons
Bend their necks under the yoke,
Your countrysides will be watered with blood
And in blood will be their footprints.

And your temples, palaces, and towers
Will fall with terrible thunder,
And their ruins shall live to say,
"This was the fatherland of a thousand heroes."

Happy Guatemala, may your sake
Never be trampled by the tormentor
Nor should slaves lick the yoke
Nor should tyrants spit in your face

WHATEVER HAPPENED IN HUNGARY'S HISTORY THAT THEY SHOULD WRITE AN ANTHEM DIRECT TO GOD LAMENTING THEIR FATE?


This is but a taste of a MUCH longer anthem!

Ah, but for our sins
Anger gathered in Your bosom
And You struck with Your lightning
From Your thundering clouds
Now the plundering Mongols' arrows
You swarmed over us
Then the Turks' slave yoke
We took upon our shoulders.

Castle stood, now a heap of stones
Happiness and joy fluttered,
Groans of death, weeping
Now sound in their place.
And Ah! Freedom does not bloom
From the blood of the dead,
Torturous slavery's tears fall
From the cold eyes of the orphans!

COUNTRIES ALSO HAVE NO TROUBLE REFERRING TO OTHER COUNTRIES IN THEIR ANTHEMS ...

Mercenary swords,
they're feeble reeds.
The Austrian eagle
Has already lost its plumes.
The blood of Italy
and the Polish blood
It drank, along with the Cossack,
But it burned its heart.

AND OF COURSE NOBODY LIKED ENGLAND

O Flower of Scotland,
When will we see your like again
That fought and died for
Your wee bit hill and glen.
And stood against him,
Proud Edward's army,
And sent him homeward
To think again.

Sons of the Gael! Men of the Pale!
The Long watched day is breaking;
The serried ranks of Innisfail
Shall set the tyrant quaking.
Our camp fires now are burning low;
See in the east a silvery glow,
Out yonder waits the saxon foe,
So sing a soldier's song.
How they  compete under the banner of Great Britain I don't know ...

MOST ANTHEMS REFERENCE GOD, BLOODSHED AND THE BEAUTIFUL LANDS. BUT I LIKE GERMANY'S ...

AND FINALLY ... DID YOU KNOW THAT THE FAKE BORAT KAZAKHSTAN NATIONAL ANTHEM HAS BEEN PLAYED ON THE VICTORY DIAS OF AT LEAST ONE SPORTING EVENT?

Kazakhstan, Kazakhstan you very nice place.
From Plains of Tarashek to Northern fence of Jewtown.
Kazakhstan friend of all except Uzbekistan.
They very nosey people with bone in their brain.

Kazakhstan industry best in world.
We invented toffee and trouser belt.
Kazakhstan’s prostitutes cleanest in the region.
Except of course for Turkmenistan’s.

Kazakhstan, Kazakhstan you very nice place.
From Plains of Tarashek to Norther fence of Jewtown.

Come grasp the mighty penis of our leader.
From junction with the testes to tip of its face!


BORAT SINGING IT TO THE TUNE OF THE U.S.A. NATIONAL ANTHEM