Demise of the Dinosaurs: A new theory

I don't know if you've heard, but there's a new theory about how dinosaurs became extinct.  But before we get to that, I'd like to go over some of the old theories.

From a sci-fi perspective, humanity existing for 150 million years would be really cool - we might finally get flying cars.  As for other definitions of success, we invented potato chips - enough said.


The most common theories thus far for the extinction of dinosaurs about 65 million years ago have been:


And it's a good thing dinosaurs are extinct.  See this illustration of the consequences of having humongous, pea-brained creatures roaming around today: 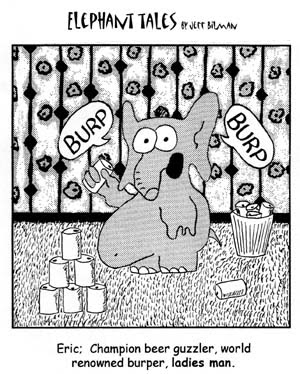 Hmmm, okay... Anyway, now there's a new kid on the block of dinosaur extinction theories. The FART.  Yes, you heard it - loud and free.

In the last couple days there have been reports (apparently from actual scientists) that certain dinosaurs were particularly farty, thus releasing a lot of methane, thus contributing to global warming, climate change and the eventual demise of the dinosaurs.  See this (ahem) Fox News Report for (ahem, again) proof.

I know what you're saying, "Jeff, you should really take the rightful credit for this new dinosaur theory."  And you're probably right - but I'm no glory hound.  Fame is not what it's cracked up to be - or so I have heard from lots of really rich people on the television (I will, however, gratefully accept donations).  And before you doubt my credentials, I've been a long-time researcher of dinosaur behaviour, as evidenced by the following "report": 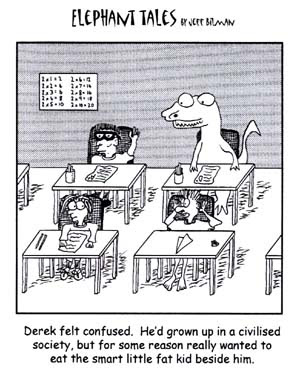 If anything's going to make you fart, it's eating a smart, little fat kid.

But I'm going to extend MY theory as I think these so-called "scientists" have not really put all the pieces together. You'd think they'd have worked it out by now, spending, as they do, most of their lives thinking about this kind of stuff, whereas I've only been thinking about it for the couple hours that it's taken to write this post.  But, I suppose they're so self-obsessed with their own little world that they fail to see the big picture.

And I think once you've heard what I have to say you'll agree that it's no longer a theory, but... Okay, let's just say it - an irrefutable fact.

So, here it is: YOU NEED TO COMBINE THE THEORIES.

No, not the theories about dinosaurs becoming depressed before eventually being wiped out by martians and/or feral cats.

Dinosaurs became extinct because they farted so much that the air was like a gas-filled oven.  Sure this all contributed to some global warming - that in itself was okay.  But when that Mega-huge Asteroid broke through the Earth's atmosphere it was like striking a match - or more correctly - LIGHTING A FART.  The explosion and resulting fireball enveloped Earth and turned every dinosaur into Kentucky Fried Dinosaur, minus the Colonel's secret recipe (which is mostly salt and lard btw).

So there you have it.  It's pretty simple now that I've spelled it out - an undeniable truth.

Another mystery solved by my amazing Journey into Stuff.  Join me next time, when I write about something else.