Watching Transformers 3 last night - all I could think of was - "when is this movie going to be over."

The (not so) funny thing was - I had the exact same experience with the first two movies. Even less funny is, let's say that each movie was about two and half hours long, well that's seven and a half hours of my life I won't get back. That's like going to work, except I don't get paid.

Thank you, Michael Bay. Thank you for taking one of my favourite 80's cartoons and making it into the horrible mess that it is ... THREE TIMES.

Stupid me for getting suckered in three times! In my defence, apparently after the panning the second one got, people were actually saying the third instalment was quite good. Well, maybe the reviewers were given frontal lobotomies - because I didn't see an improvement. 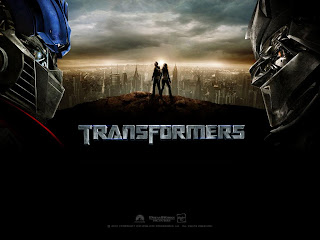 Sure, the special effects were pretty amazing, sure the love interests were stunning (really, really stunning) - but those two things don't make a good movie.

I should have know after the first Transformers movie. My wife and I had recently had our second child and had not seen a movie in a cinema for a long time. It was almost like our first date. So we went with great expectations ...

We knew things weren't going well when the teenagers sitting at the back of the cinema (let's face it - the target audience) were totally bored. Instead of being engrossed in the movie, they were making the world's longest straw by attaching one straw into another, and feeding it down the aisle. It's a sad state of affairs when the audience is more interested in how long that straw is, than the outcome of the movie.

OMG THEY JUST JUMPED THAT SHARK

There's a thing in film and television called "jumping the shark". It's when something happens that is so unbelievable that it ruins the entire credibility of the movie.  Often moviegoers can forgive one "jump the shark" moment - but that's the limit. Jumping the shark takes you out of the world of the movie and sits you right back in the theatre.

There are so many jump the shark moments in the Transformers movies. From Shia LaBeouf's gorgeous girlfriends (please - he's an okay looking guy, but seriously) 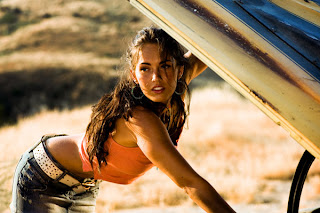 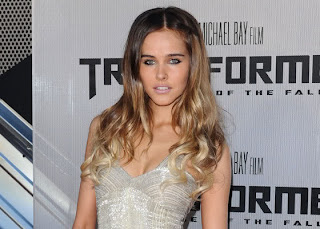 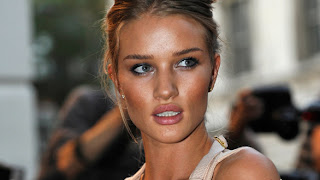 (To be fair, in the first movie Shia had to win Megan Fox, and in the second Isabel Lucas was sent to kill him, but Victoria's Secrets Model Rosie Huntington-Whitely ... JUMP THE SHARK!)

... to his girlfriend - SPOILER ALERT - telling a damaged Megatron that he is "Sentinel Prime's Bitch", causing Megatron to save Optimus. Yeah, like I'm going to go up to a 5 metre tall robot who doesn't care one bit about humans and insult him. And he's actually going to listen to me - a race that he thinks is totally inferior.

This movie did one thing; it made me think about the worst movie trilogies of all time. This is actually quite hard, because sometimes the first movie is great and then they go downhill from there. I've only included the movies I know well enough to comment on - would welcome other suggestions.

1. Transformers
2. Most horror movie trilogies
3. Anaconda
4. Star Wars Episodes 1-3 (okay 3 was pretty good, but we didn't really need any of them)

I'm stopping at this point because this is where is gets very hard. There are so many great first movies that with film two and/or three go down the toilet: Beverly Hills Cop, Pirates of the Caribbean, The Matrix, Rocky, Austin Powers, Jurassic Park, Die Hard, Rambo etc etc.

What we can say though (IMHO), without too much doubt, is that the Transformers Trilogy truly sucks - beginning from the first movie.

And did you hear?  They're making Transformers 4. And you what? I'll probably watch it when it comes out on DVD, forever in the hope that they might just finally get it right ...

Journey into Stuff by Jeff Bilman is licensed under a Creative Commons Attribution-NonCommercial-NoDerivs 3.0 Unported License.
Please note, visitors to this website are solely responsible for the information they post. Any posting of copyrighted material is strictly prohibited and the owner of this website shall not be responsible for any copyrighted material uploaded by third parties.